It started snowing on Christmas Eve…those big, fat, fluffy, pretty flakes. It was gorgeous and quaint and nothing out of the ordinary for Erie in December. Until it never freaking stopped…for like four days.

It just kept coming and coming and coming as that storm sat over Lake Erie, picking up warm water and throwing it at all of us in solid form. I think the total was over 80 inches (more than six feet) when it was all said and done.

Our backyard topped out at just under four feet (those closer to the lake got more), but it was more snow all at once that I remember seeing in my lifetime. (Word has it there was a similar Xmas storm in 1977, but I was five, so…I don’t remember it).

I was eternally grateful for two things: My dad’s funeral service was over before any of the nasty stuff hit (treacherous travel would’ve only made things 100 times worse), and the girls and I had the whole week off and didn’t really have to go anywhere.  I missed a couple of appointments/events that were canceled or rescheduled, but…in general…we got off easy because by the time we had some “can’t miss” stuff on Thursday, the major snow had stopped and the main roads and interstates were cleaned up.

After the snow, came the cold. It’s currently 5 degrees in the city by the bay. So, that snow is not melting anytime soon, which is good because if we get a fast warmup, flooding is going to be a major concern as all that snow melts and makes its way back to the lake.

Meanwhile, Erie is frozen in a beautiful suspended winter state. Here are a few of my photos from the big storm, from the first big dump to the final tally (well..final, so far, I hear there’s more on the way this weekend…oi vey…where are we going to put it all?)

This was originally posted on my other blog: Goerie.com/blogs/runners-notes.

Friends and I (in the hot pink pants) hit the trails on our shoes this weekend.

The older I get the harder winter running is on my body.  It’s not the cold (I actually prefer colder temps), but the snow/ice/slush that make footing dicey and terrain uneven. The constant adjustments required by my ankles and lower legs/feet to keep me upright aggravate my long-standing Achille’s tendon and hip issues and lead to a day or two of post-run hobbling and icing.

Since I hate the dreadmill and/or running on an indoor track, I’m at the mercy of Mother Nature. I’ve learned to be flexible — skipping a day or running later in the afternoon and early evening (after the sun has had a chance to melt the roads) or driving to run in parts of Erie where the streets are clear.

But, in the last couple years, I found another option: snowshoeing.

What you need to know:

At Devil’s Backbone at the top of the Wintergreen Gorge trail.

Where to shoe around Erie:

Want to try before you buy?

Both Presque Isle TREC and Asbury Woods frequently offer snowshoe clinics and, I believe, both rent snowshoes at their facilities (at PISP…they are at the cabins where they rent XC skis).  Also, you can rent snowshoes and use the snowshoe trails at Wilderness Lodge cross-country ski resort in Wattsburg.

Originally posted at my Runner’s Notes blog at Goerie.com

I’ve participated in the Highmark Quad (Swim, bike, run, ski) several times, but I’ve only ever had to do the ski portion once (thank you, Mother Nature!).

I did it three years ago at the Peek and, well…friends, I’ll just say it, it was terrifying. It was icy and the course was fast and I had no idea how to stop, besides skiing into deep snow or a tree. I wish I were kidding, but I’m not. (Snowplow…I know, but…what can you PLOW when there is no snow on the course?)  I even wrote about it. Read my whole , er, sad account here.

I’ll admit it soured me on the Quad.

But then, they moved the ski event to the Wilderness Lodge which had become sort of a home base for us the past few years as the girls participated in the Wilderness Wildcats Cross-Country team. (BTW, the Wildcats is a FABULOUS program for kids/teens.)  I briefly pondered doing it last year, but…I chickened out.

This year, new Quad director Kelly Latimer flat out flattered me onto the course, talking Pam Parker and I (current and past editors of the Erie Times-News’ Her Times magazine) to do the 2.5 mile snowshoe together. Latimer clearly learned a few things from her father-in-law, Craig (former Quad director), who was also known to be a very likable and confoundingly persuasive guy (a true marketing guy).

Flattery and the prospect of a couple hours of uninterrupted adult girlfriend-talk time and maybe a post-race beer will get you everywhere with me, so I told Pam I’d do it if she would and we agreed to strap on a pair and give it a go on Sunday at the final event in the 2015/2016 Quad games.

It was pretty awesome, as evidenced by the genuine smiles in this “after” photo:

The location.  You’d be hard-pressed to find another ski lodge that offers what the Wilderness Lodge can —  snow that sticks around (the lodge is in some weird pocket that allows it to keep what it gets for a long time) with acres and acres of old-growth forest and well-groomed and interesting trails.  And the eclectic lodge itself is pretty awesome, too (more on that below).

This photo doesn’t even begin to do the scenery justice.

The event. This will come as no surprise to you, I liked the snowshoe a whole lot better than the ski. Really, anyone can snowshoe. And you can pick up a set of shoes for less than (or a little over) $100.

The course. There weren’t a ton of hills on the course, but there were enough to make you sweat a little. Because we were walking on the side of the groomed trails, it was easier shoeing that what I’m used to (tromping through a foot or more of snow in the woods).

The organization. The whole event was really well organized, but I will say that if I weren’t familiar with the lodge, I might have been confused about where to go (registration was in the Wilderness Wildcats room below the ski rental, not in the lodge). I actually thought the event started at 2, so we arrived pretty late (my bad) and just in time to strap on our shoes and go. (I also thought the event was Saturday, so…moral of this story: Always double check when I tell you the date or time for something, k? *kiss kiss*)

The porta potties. There’s only one bathroom in the Wildcats room and one with two stalls in the main lodge, so….additional porta potties located outside the rental shop were a smart call and money well spent, in my opinion.

The volunteers. Friendly, helpful, smart, efficient. I was pretty impressed with every volunteer we came in contact with, but was especially impressed with some of the “road marshals” who were standing out there directing participants in the cold. Word has it many of the volunteers were from the Erie Tri Club (you guys– and girls — rock!).

The weather. Wow…we could not have asked for better weather than we had on Sunday. Clear and cold, but not too cold. It was a little windy in the open fields (always is), but was sweet once we got between the treelines.

The timing. Big White Trailer is the best. Results were posting before we even had our snowshoes off.

The post-race lodge fun. I love the lodge — the noise, the warmth, the old photos on the wall, the mismatched coffee mugs from all over the world, the snowmobilers mixing it up with the skiers, the wait staff screaming out people’s names to pick up their orders, and, of course, that cracking fire in the center of it all, where everyone dries their gear and warms their butts.

I’m reaching here because none of these are really “bad,” but…

I was overdressed. I had on running tights, snowpants, an under armour tank and a fleece-lined microfiber LL Bean jacket, and I was sweating pretty quick. I got so hot that I took off my gloves and I would’ve taken off my hat, too, but….(see “The ugly” below). Tights, Under Armour and a windbreaker probably would’ve been enough.

The drive there. Look, I’ll be honest. The drive to the lodge sucks. Now, this may be just the way that I go there (which I’m told is the “hills and thrills” version), but there is no “easy” way to get to the lodge. The roads are really hilly, not well-maintained (read: long after the snow had fallen…it’s still there) and there’s no signage pointing you where to go (unless you count the little blue “cross country skier” signs you see randomly along the way). That said, good luck finding a ski lodge that is easy to get to or doesn’t involved driving up and down snow- or ice-covered hills.  On a good day, like it was Sunday, the drive is fine….pleasant (and quite beautiful), in fact.

Parking. Meh. I hate to even add this to the list because where could you put the influx of traffic from a couple hundred people for an afternoon event?  The lodge actually doubled their parking lot a couple years ago, which is great for busy weekends, but, of course, even if they expanded it four-fold it couldn’t contain all the Quad participants. The good news is…there’s a least a mile of road parking on each side of the lodge.

Southern Tier on tap. Um…here’s a PSA: The Southern Tier Brewing beer on tap at the lodge (I think it was Old Man Winter...it could’ve been 2Xmas) has a 7.5% alcohol content. Just letting you know. It was really, really good beer, but just don’t let it go down too fast, if you know what I’m sayin’.

My hair after taking off my sweaty hat. ’nuff said.

Note: If you choose to do the snowshoe, you are considered a “fitness participant” and you’re not in the running for the overall Quad title because, well, it wouldn’t be fair. The snowshoe is half the distance and probably requires half the skill/energy of the ski race.

Ready to do the Quad?

After a fun snowshoe event, I’m planning to talk/bully/persuade/bribe at least one of my daughters, if not both, into doing the Quad this year. The first event — a 100 yard swim at Edinboro University (4 lengths of the pool) — will be held in April.  When this year’s info is available, it will be posted here. You can also like them on Facebook.

It’s hard to believe that you could improve on a hot steaming cup of milk and chocolate, but…turns out you can. ’tis the week to indulge, so check out this awesome infographic for some new twists on an old wintertime favorite:

Ladies and gentleman, I give you the Father of the Year – Dan Cass: 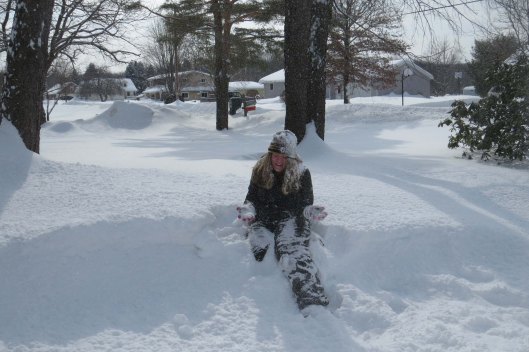 Hey…just like we tell the kids in the summer, if you hang around the pool, you’re going to get splashed.

Of course, they’d be safe from splashes around the pool right now:

Despite our best attempts at staying positive in the face of single digit (zero digit and minus digit) temps….

We’re growing weary of driving on this:

Seeing the world through fat flurries: 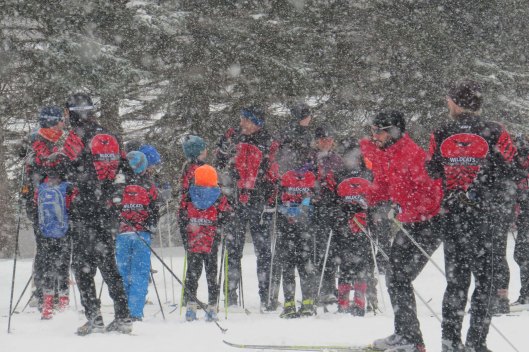 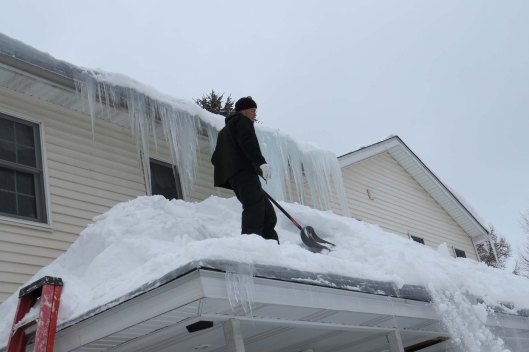 As for Sam, he doesn’t care because every single day is awesome to Sam. 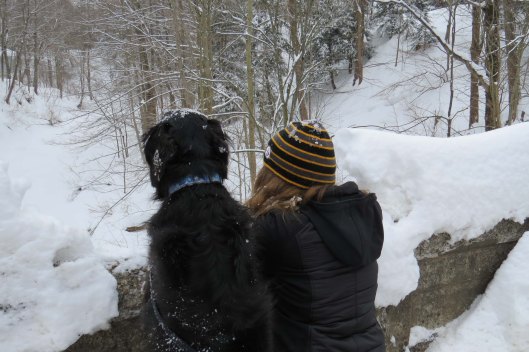 And make the best of whatever is: 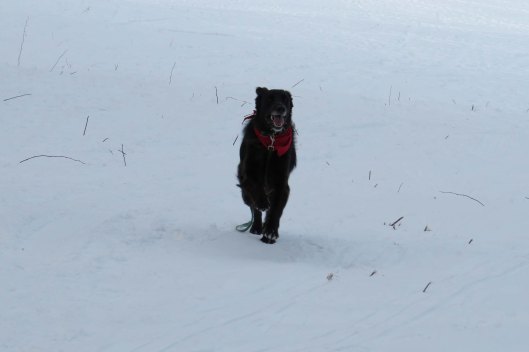